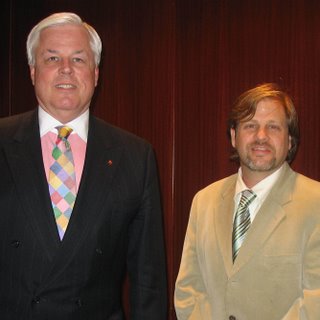 Charles Connor goes On the Record…Online about crises communications, the American Red Cross‘s response to Hurricane Katrina, and using the internet to communicate with the public.

In 2005, Charles was one of the three American Red Cross executives to have been named Public Relations Professional of the Year by the Public Relations Society of America, in recognition of the strategic communication plan created and implemented during one of the worst hurricane seasons this country has seen.

3:16 – Chuck Connor talks about being on PR Week’s list of the top ten most daunting PR jobs.
3:50 – Connor explains what crisis communications is.
4:49 – Connor on the steps organizations should take to prepare for a potential crisis. “I’m a believer…that it’s very hard to plan for every crisis. I think you need to keep your head on, I think you need to keep your emotions under control…”
7:54 – Connor on how to determine whether there is a crisis in a company.
8:41 – Connor talks about whether FEMA’s alleged late response to help Katrina victims impacted the public’s perception of the Red Cross’s relief efforts: “This Katrina matter…took ever resource the United States and the United States government could throw at the problem. It was far bigger than FEMA, it was far bigger than the Red Cross, and it was almost too big for the whole Department of Defense.”
10:14 – Connor discusses how he first heard about the Katrina disaster. “My deputy Darren Irby…[said] it was as if a nuclear bomb had gone off.”
11:04 – Connor on how he felt when he received the news about Katrina.
12:12 – Connor talks about his role in communicating on behalf of the Red Cross.
13:28 – Connor on how the Red Cross uses the internet to communicate with the public: “We take the web and internet very seriously…we’re going to put more importance to it…because it is a channel that we can use to let the public know what the Red Cross message is directly, unadulterated by reporters or other kinds of gatekeepers.”
14:42 – Connor talks about the importance of the Red Cross’s site, www.redcross.org, and the critical information it offers.
15:53 – Connor offers words of advice to other corporate communicators who are asked questions that they cannot answer.
17:36 – Connor on what the ambushed, unprepared executive should say to the media.