PODCAST: On the Record…Online with Burson-Marsteller Founder Harold Burson 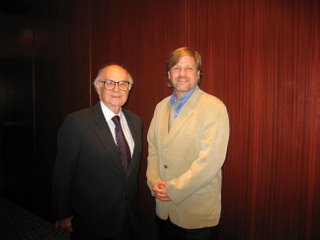 Harold Burson goes On the Record…Online with host Eric Schwartzman to discuss the future of the public relations industry and offer words of advice to people both entering and working within the field.

Harold Burson, founding chairman of Burson-Marsteller, was described as “the century’s most influential PR figure” in a survey conducted by PRWeek. The architect of the largest public relations agency in the world today, Burson has contributed to the public relations industry and worldwide community as a member and leader of several organizations, among them Presidential appointee to the Fine Arts Commission, Chairman of the National Council on Economic Education, and Chairman of the USIA Public Relations Advisory Committee. Burson has received numerous honors and awards, including The Public Relations Society of America Gold Anvil Award and the Arthur W. Page Society Hall of Fame Award. He was named Public Relations Professional of the Year by Public Relations News in 1997 and 1989.

5:37 – Harold Burson on defining public relations: “…I think one of the problems today is the broad umbrella of public relations is being equated with marketing publicity…”
6:45 – Burson shares his thoughts on blogging and what he has learned from starting his blog.
7:56 – Burson offers advice to university students entering the public relations workforce.
8:58 – Burson on whether people entering the workforce need to be tech savvy.
10:33 – Burson talks about the shift in the balance of power of the PR industry.
12:02 – Burson on how to manage client expectations: “…The best client relationships and most effective client relationships are when the two parties to the agreement or to the project are working in tandem and you can’t tell at the end who really…deserves the credit.”
13:26 – Burson on whether client expectations are more or less realistic today.
14:56 – Burson talks about how to respond to a client that is not satisfied until he or she receives coverage in The Wall Street Journal.
16:39 – Burson on whether a relationship with a client is more important than the results delivered for the client.
18:18 – Burson on the struggle of the mainstream media business: “…people no longer depend on a newspaper for breaking news.”
20:04 – Burson talks about whether blogs, podcasts, and other forms of consumer generated media are effective media channels for corporate communicators.
21:20 – Burson responding to a question on whether more public relations practitioners will embrace the internet to communicate directly with constituents: “I see public relations people taking advantage of every opportunity there is…to disseminate information for their client.”
23:00 – Burson talks about transparency in PR and bringing the Tylenol tampering scandal to 60 Minutes. “…It was a story that we felt had to be told to the American people…”
24:41 – Burson on what his strategy would be for PR if he were starting over today.
28:11 – End