PODCAST: On the Record…Online with Blogger, Author, Journalist J.D. Lasica 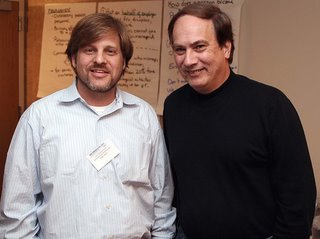 J.D. Lasica, blogger, author, and journalist, goes On the Record…Online with host Eric Schwartzman at the New Communications Forum in Palo Alto, California, to discuss working as a journalist in the mainstream media, citizen journalism and citizen media, and the affects the new media has upon traditional journalism.

J.D. Lasica is co-founder and executive director of Ourmedia, a nonprofit global repository and community space for grassroots video, audio, photos and text. He’s a writer and blogger. His new book about the personal media revolution — “Darknet: Hollywood’s War Against the Digital Generation” — is the result of two years of reporting and research. J.D blogs about citizen media and digital rights at Newmediamusings.com and Darknet.com. In a previous life, he was an entertainment editor at the Sacramento Bee. He is a senior fellow of the Society for New Communications Research. J.D., thanks for joining us.