PODCAST: On the Record…Online with Blogger, Author, Journalist Dan Gillmor 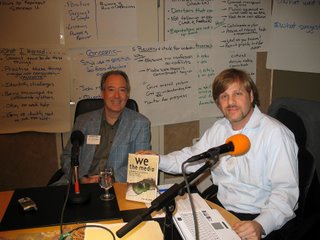 Blogger, Author, Journalist Dan Gillmor, goes On the Record…Online with host Eric Schwartzman at the New Communications Forum in Palo Alto, California, to discuss the rise of grassroots media, the relationship between citizen journalism and traditional journalism, as well as the future of the media given the rise of online journalism.

Dan Gillmor is the founder of Grassroots Media Inc., a project aimed at enabling grassroots journalism and expanding its reach. He is the author of “We the Media: Grassroots Journalism by the People, for the People,” a book that explains the rise of citizens’ media and why it matters. From 1994-2004, Gillmor was a columnist at the San Jose Mercury News, Silicon Valley ‘s daily newspaper, and wrote a weblog for SiliconValley.com. He joined the Mercury News after six years with the Detroit Free Press. Before that, he was with the Kansas City Times and several newspapers in Vermont. Dan is currently directing and working on projects related to the Center for Citizen Media, a non-profit organization helping to enable citizen journalism.

3:18 – Dan Gillmor talks about launching the Center for Citizen Media.
4:45 – Gillmor on why he decided to leave the San Jose Mercury News.
6:03 – Gillmor discusses the development of grassroots media in the United States: “…the digitization and democratization of the tools for creating media…is the big shift that enabled people who wanted to say something to actually say it…”
10:30 – Gillmor on the credibility of citizen journalism: “We’ve learned over the years what’s trustworthy and what isn’t in traditional media. We have to now apply very similar skills and learning to understand what we can trust online…”
13:32 – Gillmor talks about how technology can help with editorial oversight.
14:31 – Gillmor talks about applying grassroots concepts to newspapers and traditional media organizations: “…look at the tools for conversational media that exist like blogs, like podcasts…and use them internally as part of the news gathering and dissemination process done by professional journalists…”
17:39 – Gillmor talks about how the online media can work towards ensuring truthful coverage: “one thing bloggers are pretty good at is debunking and fact checking after the fact.”
20:00 – Gillmor discusses his book “We the Media: Grassroots Journalism by the People, for the People.”
20:58 – Gillmor talks about the ways traditional media organizations and citizen journalists can work together “I would like to see individual journalists…be more willing to listen to readers who want to talk about what they are doing and offer their own insights.”
23:30 – Gillmor on how long it will take newsmakers and readers to work together: “…I think over time we can have a pretty healthy and diverse ecosystem that includes the big media and the micro media…”
25:43 – End