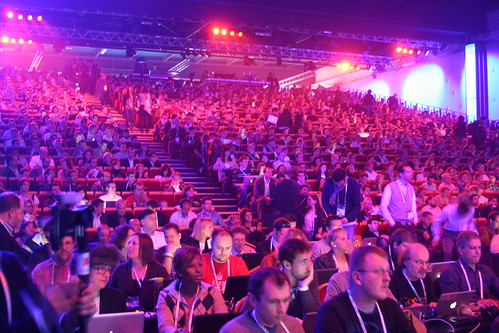 But most netizens today are not Americans.

The majority of Facebook, Twitter, Linkedin users reside outside of the US. And in many of those places, commerce is not necessarily the primary objective of business.

In some countries, the ambitious are suspecting of undermining the public interest.

You need it to live, but it is not the purpose for living.

Surely, you can’t deny that in the US, there are corporations that profit at the expense of the greater public interest.

Maintaining sensitivity to cultural nuances outside the US is key to successful online communications.

SXSW, the annual mecca for the global tech community, draws an international audience.  But it happens in Austin, so the global perspetive is diluted through an American lens.

Le Web on the other hand, which happens every December in Paris, showcases the global tech scene through a distinctly European filter, which is extermely valuable to communicators residing inside the US.

Produced by Loic and Geraldine Le Meur, it is the fastest-paced, most entertaining of the tech conferences — with the best food and the higest production values — and packed with hard newsbreaks.

Here’s some of the announcements at this year’s conference:

But the bigger, more strategic lesson I got came from experiencing the emerging online tech sector in a mature market like France.

The French government has long been regarded as overly bureaucratic, contemptuous of corporate greed and downright arrogant.

Here are a few examples:

It’s easy to dismiss the French as aloof.

But my take is, they just have different priorities. You may not be able to get online easily, but if you have a medical emergency, they’ll take care of you for free, with or without insurance.

The French also have a much lower tolerance for anticompetitive practices and revile unchecked corporate power.

They seem to legitimately want to put the public interest before commerce.

You don’t get ripped off on soap and you can get healthcare when you need it.

But it doesn’t always work, especially when it stymies innovation.

In his keynote, Google Chairman Eric Schmidt said the role of government is to equip citizens with reliable, fast and affordable wireless and stationary broadband, so they can innovate themselves out of the current economic funk.

But today, if you want to spur innovation and commerce, you need high-speed broadband.

Easy, cheap access to the Net in Sweden lead to a number of breakthrough technologies including the peer to peer file sharing, which led to Skype, and more recently Spotify, a social network that lets user share privately, who’s founder also presented at Le Web.

Silicon Valley needs a competitor, says Schmidt, and unless you want to live in Berlin or Stockholm, other European governments need to make it easier for people to innovate.

Some say unchecked corporate power in the US has led to an environment where corporations have grown at the expensive of individuals.

Last week the Federal Reserve reported said household net worth declined 4% over the summer, while company holdings climbed for the fifth consecutive year.

The bigger lessons from this year’s Le Web is this:

But cultural differences really do matter. Different cultures have different expectations which anyone selling to a global audience needs to be mindful of.

I rented an apartment in Paris through AirBNB while attending Le Web and after getting locked out, l was challenged to overcome a difficult situation without anyone to advocate on my behalf in a timely manner.

I have since exchanged tweets with the company’s founder Brian Chesky inviting him to discuss my experience at On the Record…Online, and spoken to the company’s staff, but no one appears to be willing to talk to me on the record about my experience.

In my next post I’ll write about my AirBNB experience.

I’d like to acknowledge AirBNB’s point of view of in my post, so I hope Brian, or someone at AirBNB, will agree to a constructive, civil dialogue about my Paris apartment rental experience.